Why is Friday 13th considered unlucky? 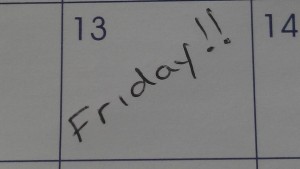 So, Friday 13th has come around again. Has anything happened to you that could be considered bad luck? Why do we believe that things will go wrong when a Fridays and the 13th day of the month collide? The short answer is that no-one really knows. According to Wikipedia there is no written evidence for this folklore prior to the 19th century, although there is one theory that it’s an amalgamation of 2 older superstitions that thirteen is an unlucky number and  Friday is an unlucky day.

What I found most interesting though, is that according to the Stress Management Center and Phobia Institute in North Carolina, an estimated 17 to 21 million people in the US are affected by a fear of this day. This surely means that they’re actually expecting something to go wrong for them on this day.

Doesn’t it then follow that if we start Friday the 13th with an expectation that bad luck is more likely to affect us on that day, then it probably will?

So, I thank you for reading today’s blog, and now I want you to think calm happy thoughts. DO NOT think “don’t think about Friday the 13th.” In fact, perhaps I should apologise for writing this and putting it in your mind in the first place. Sorry!

law law of attraction self development