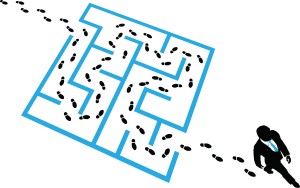 Is there a quicker way?

Over the years I’ve helped many sole traders establish how to make social media marketing work for them. What they need is a strategy that will be effective, but also won’t take too much time. After all, they wear many hats; service provider/manufacturer, book keeper, cleaner, tea maker, sales person and more!

As part of my training, I make them aware of social media shortcuts they can take. The trouble with these shortcuts is that they’re not ideal – they have consequences. I don’t see it as my role to tell people which ones to take, just to inform them they exist, and also to point out the down-side and then people can make their own decisions. We’re all adults, and we all have our own ideas on what is and isn’t good business practise.

What I’d like to do is conduct a little research here and find out from you what shortcuts you use, and which ones really put you off. I don’t expect to reach a definitive answer, although it would be great if I could report back in a future blog what the majority prefer.

Using Hootsuite or similar  – Hootsuite has lots of benefits that have no negative implications, such as scheduling to twitter and following twitter lists, but when it’s used to schedule posts to Facebook you’ll often find that Facebook will penalise you by not showing the post to as many of your Fans than if you’d posted it directly on Facebook.

Personally I don’t use any of these shortcuts for my fully managed clients, although I do use Hootsuite for its many positive aspects, and encourage my training clients to do this too, but it’s my business, whereas your business is probably something entirely different and social media can only take up a small fraction of your working day.

I would really appreciate some feedback on this, so if you could comment on…

Which shortcuts do you use – any of the above or something different?

Are there any that really irritate you and shouldn’t be used?